Nothing delights us more than to create magic for couples who chose to get married in Rome, especially when they travel so far to make the Eternal City the location for the beginning of their lives together. This was most certainly the case for the wonderful Norwegian couple, Tone and Espen, who came to us to help plan their special day. Though originally from Norway, the two had visions of saying “I Do” with a rustic-Italian themed wedding in the heart of Rome. We set out to make the wedding of their dreams a reality!

On a stellar afternoon in the Italy, friends and family gathered on the rooftop terrace of the Villa, an old historic monastery located in the heart of the city. The terrace offered spectacular views of the skyline, which was the perfect backdrop for the two to exchange their vows. The ceremony began, and it soon became clear to the couple that the wedding of Tone and Espen’s dreams was unfolding right before their very eyes. Espen, the bride, looked absolutely breathtaking as she walked down the aisle to meet her husband-to-be. She was wearing an elegant white dress with a studded belt, a flower crown around her half-up hair do that perfectly accented her bouquet of flowers. It was the perfect rustic-Italian bridal ensemble.

The ceremony itself was very moving, and there was an excitement in air that was palpable among guests who witnessed Tone and Espen’s love. Vows were exchanged, the presider said his words, and finally they were presented as husband and wife! The two were beaming as they walked past their family and friends as a newly married couple. After such a special ceremony, the couple then went on to capture some wonderful photographs. Some of the best ones include a panoramic view of the city behind them, and others were taken in picturesque Italian alleyways. They turned out lovely, and we know those will be photos the couple will be sure to cherish forever.

The reception was held in courtyard of the same venue where the ceremony took place. As mentioned before, the is an historic monastery centrally located in the City of Rome. Not only does this landmark venue encompass a great deal of history, but also of quaint Italian charm. It could not have been more fitting venue for the couples’ day, from start to finish. When guests made their way to the reception area, they were greeted by a romantic garden space that was seemingly tucked away in it’s own world. Long tables were adorned with flowers and candles along runners, olive branches were scattered around the venue and within the decor, lights draped along the surrounding tree branches to create a magic and romantic atmosphere.

The decor was so simple yet so elegant, and the whole area looked as though it were out of a fairytale. But perhaps the best part of the reception area was the laughter and love that filled that space. Everyone was so joyful. Tone and Espen could not seem any happier to be celebrating loved ones. From the first dance to the delicious meals, from cutting the cake to the final send off with sparklers and champagne in hand, it was an all-around perfect night. We felt so honored to have been a part of it. 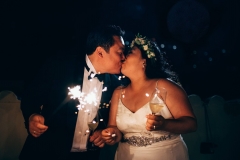 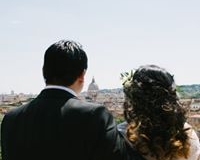 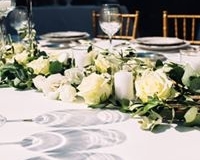 Thank you, Tone and Espen, for sharing your day with us! We were delighted to work with you and wish you many years of life, love, and laughter together!